A minisite for a new pump that Accuydne wanted to use for the OTC. There was a very short deadline and no flexibility.

This minisite needed to look very good and have neat animations and interactivity, but I only ended up having about three days to build it in. Originally I was going to have a week (two days were lost waiting on material) and even that would have been impossible if functions would have needed to be built from scratch.

The main success was that it was built on time, to spec, and the client was pleased. In order to accomplish the design I first drafted up a dev plan, split it into ‘must haves’ and ‘nice to haves,’ researched which of the available plugins might best achieve the result without custom development and then communicating about that with the designer to allow him to adjust his design to match the plugins as much as possible. In the end it was quite a work of collaboration.

Also here is an implementation of my adjustments/extensions (though a plugin of my own) of visual composer. I learned how to extend it and then created custom, adjustable blocks that could handle as many scenarios as possible. This was to allow easier management on the backend which was a specific request by the client.

This project was particularly interesting for me because of the challenge of coming to compromises and working with the designer to get the design as close as possible to plugins to avoid custom programming. There were still tweaks to be done and plenty of design work, meaning extra hours to put in, but at least it became possible.

Credits: This project was done while working for Savage Brands as Lead Web Developer. It was designed by David Irias.
Visit: http://ericpumps.com/ 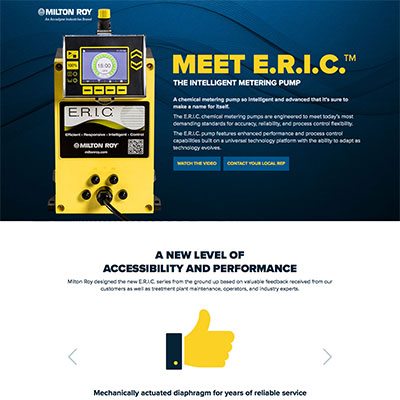 This was a single page design so all the blocks here are specifically for this page, but remain modular and reusable elsewhere. I extended visual composer (the popular wordpress plugin) to allow for custom fields and blocks which in turn allows each block here to be reused and reordered as desired.